Why do People get Tattoos? 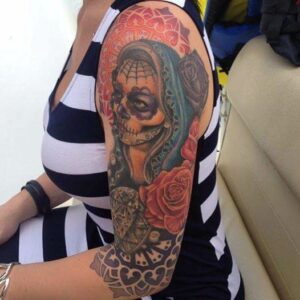 Trying to get some tattoo ideas I started asking friends and people at work who have tattoos why they got them. I was actually surprised by how many people have tattoos because I just didn’t see them initially. What amazed me were the responses I got, which varied and were quite interesting to hear. When asked do you have a tattoo story? Most of the people immediately respond with “Yes I do” and would go on to show a tattoo that has the most meaning for them or is their best looking most exquisite tattoo. Sometimes its because a famous tattoo artist has done the tattoo like the ones featured on H2Oceans Pro-team

Tribute to a Loved One

When asked if they had a tattoo story, some people think for a bit and tell the story of a significant other or family member who was a big influence in their life. Some of them have past away and this is their way of paying tribute to them. One story I heard was about a guy who loved Snook Fishing with his Grandpa, so he had a big snook jumping out of the water on his calf. I could see the smile he had as he remembered his grandpa and the times they had together. I guess that’s as good of reason as any to get a tattoo, especially if it makes you happy when you speak of it. You can see the love they have for these people as they tell the story behind the tattoo. Their tattoo is more than just body-art, it also represents the respect they have for the person they are remembering.

Other times it is a time in their life where they enjoyed the moments spent doing something they love. One famous LA Actor had a Tattoo placed on his back that showed a scene at the beach with his two siblings. It was an old Polaroid picture of his brother and sister at the beach when they were just kids. This is one of the stories in Tattoo Nation, a documentary about the History of Tattoo’s, which H2Ocean was a participating sponsor. I was struck by the emotion he had to revisit those carefree days of summer.

Some people have affinity in mind when they get a tattoo. In the days of World War 2, the branches of the service were a very popular tattoo design. Many soldiers came home with a tattoo that showed the logos of the units they served in during the war. Others will use affinity tattoos to show organizations they are affiliated with or are enthusiastic fans of bands, entertainers or sports teams. One guy was so enamored with Manchester United that he had their logo tattooed on his forehead. Now that’s a committed fan.

Some people really go all out and their body becomes a canvas of their self- expression. Of course they all use an experienced tattoo artist, and must be especially concerned to make those tattoos heal correctly. Extreme Tattoos are very expensive and can cost thousands of dollars. In order to make sure the ink sets properly, many enthusiasts only want specifically designed products that are made especially for healing tattoos. You can find a Supreme Tatto Kei here here @ H2Oceanshop.com

No matter why you choose to get a tattoo, it is important to make sure that after you get it done, you protect your tattoo and the canvas it is tattooed on.